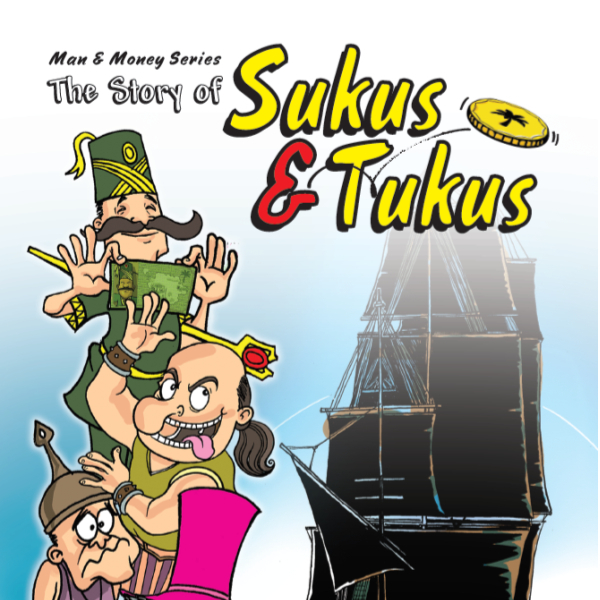 There were once two neighbouring islands far away in the oceans. One was called Aya and the other Baya. A certain people called the Sukus lived on the island of Aya . It was a fertile island with lush vegetation and tropical fruits. There were numerous waterfalls and rivers that provided the people with clean water and places for family retreats and recreation. The surrounding seas were unpolluted, with abundant fish and other seafood. The island also had gold and the Sukus, particularly the womenfolk, loved gold, They used pieces of gold as money since everyone treasured gold. Their tribal leadership led by a man named Saka, minted the gold coins. They lived a simple cooperative life and there were no interest charges for lending and borrowings among themselves. Occasionally, some tidal waves and strong winds destroy some property, particularly homes, but the community would immediately help themselves to rebuild or repair the damaged property. Other than that, it was a peaceful community of people who went about their life gracefully.

The island of Baya , on the other hand, was inhabited by a people called the Tukus. Their leader was an elderly man named Taka. The island of Baya was fertile too and the Tukus were mostly farmers who worked rice fields or kept cows, sheep and poultry. Some of them were good at handiwork and produced a variety of household items. They too lived a very peaceful and cooperative life, mutually helping each other for survival. The Tukus were, however, not so sophisticated as the Sukus, in that they merely did barter trade. The Tukus realized that the Sukus were much wealthier, healthier and had towns that were much more sophisticated than their own. They had always thought that the Sukus were more gifted and superior beings than themselves. Even though they barter traded their goods occasionally with the Sukus they never got the idea of money. However, their women-folk too loved gold, particularly the gold jewellery that the Sukus made.

One day, two smartly dressed men arrived in a ship on the shores of the island of Aya . Their names were Gago and Sago. The Sukus being a very hospitable people welcomed their new guests. Gago and Sago impressed the Sukus with the stories of their extensive traveling. They showed them some gold coins from other parts of the world and also some printed papers that were apparently used by some far-away people as money.

The Sukus had never seen paper before. The paper money even had pictures of bananas on it – their favourite fruit. The two strangers also showed them a machine that prints such money. Wow! That got the Sukus’ attention. There were awed because they had never seen anything like that before. The islanders loved Gago and Sago and invited both to live with them on the island.

Gago and Sago convinced the people that an institution called a bank would benefit the people immensely. They explained that a bank would provide a place for keeping their gold money safe while uplifting their economic conditions by making the savings available to others for productive use, which otherwise would remain idle. The Sukus, being a people who loved to help others, thought that was a great idea. Gago and Sago then built a small building structure with a vault in it and started operating the first bank on the island of Aya .

They celebrated the occasion by giving the islanders a great feast along with a colourful festival of events. The people thronged to deposit their gold coins with the bank. Depositors were given a piece of printed paper for every gold coin they deposited, with the assurance that they could redeem a gold coin for every paper they turned in. The people were excited with the paper “money” they got because it even had a picture of their leader Saka beside a banana tree. No doubt Saka was very pleased too!

The people deposited all their gold coins, a total of 100,000 pieces and hence an equivalent number of pieces of paper were given out. Now the people used the paper as money and found that it was much more convenient than the heavier gold coins that they used before. The paper money printed by Gago and Sago, therefore, became the dominant currency of the island. Nobody used the fold coins anymore. The people were pleased with the ease with which they were able go about doing their businesses. They trusted Gago and Sago very much because each time they brought in a piece of paper for redemption their request was indeed honoured. Gago and Sago became very respected and honoured in their society.

The Tukus who heard about the whole thing became excited and pleaded with Gago and Sago to help them out too. Gago and Sago smile to each other and told the Tukus that they would indeed be very pleased to do so. They then set up a similar building in Baya, and Sago was placed there as the manager. The difference between Aya and Baya was that in Baya the Tukus had no gold coins to deposit. Sago told them that was alright. He would however, give 1,000 paper notes to each family to use as money. Since they were a hundred families in Baya, so 100,000 paper notes were given out. However, Sago reminded them that at the end of the year each family must return 1,100 paper notes, the 10 per cent extra being a charge for the services he was providing. The Tukus found the paper money truly to be like magic. It made their business dealings so much easier compared to their previous barter trade. People spent much less time looking for counter parties to trade with. Now they were able to specialize in jobs they were good at. Their economy began to grow rapidly. Now Gago and Sago decided that the time was ripe for them to do their “trick”.

Gago noticed that in Aya, on average only 10 per cent of the fold deposits were redeemed by the Sukus at any particular time. The other 90 per cent remained in the vaults. Noticing that their printed papers were circulating as money, Gago printed an extra 900,000 certificates to be circulated as money too! Gago had calculated that with the extra papers, a total of 1,000,000 pieces of paper would be outstanding and if the people came to redeem their normal 10 per cent, then the 100,000 original deposit of gold coins would be readily available for redemption.[1] Gago loaned out this extra 900,000 paper money to some “needy” Sukus at an interest charge of 15 per cent.

The Sukus suddenly found that the prices of things were rising. This baffled them and no one could figure out why.[2] Some of them who had borrowed money form Gago were not able to pay back their debt even though they worked very hard trying to earn that extra money.[3] Business became increasingly competitive and the society became less compassionate and less caring towards others than previously.[4]

The Tukus too found similar things happening to them. Initially, they did not notice any price increase but they noticed some behavioural change in their people. They became very competitive in their attitude and less caring towards their fellows. Even with hard work and such competitive behaviour, some of the Tukus still defaulted on their loans. They were not able to acquire enough money to pay back their total debt.[5] Now Sago began to confiscate real wealth from the loan defaulters –like land, cows, sheep, etc. Their elderly leader Taka was among those who defaulted. But Sago gave him and some other Tukus additional paper notes as a rescheduling of their loans. This increased further their indebtedness. Later Taka defaulted again and had his loan rescheduled again. Now Taka began to avoid meetings with Sago. He felt ashamed and found his former power, pride, courage and dignity falling.[6]

On the contrary, he found that Sago was slowly becoming very wealthy by acquiring the people’s assets. In fact, he found that the power, pride, courage and dignity that he lost were now enthroned on Sago.

After a number of years, Gago and Sago who once arrived on the shores of the island of Aya with only a printing machine, were now the owners of most of the land and property in both Aya and Baya. The people were reduced to mere workers, some of them now living in poverty. Many worked long hours just to make ends meet. They now had less time for family, friends or for religious activities. Social problems were widespread.

People cared less for other. It goes without saying that with poverty, other social ills like crime, prostitution, etc. began to thrive. Their cultures were gradually replaced because Gago and Sago introduce a new “superior” culture of a “superior” people to which they belonged. This was the end of the caring and loving people of the two islands Aya and Baya, who had earlier lived a peaceful yet graceful life before Gago and Sago arrived with a printing machine.

Gago and Sago did not stop there. They continued to spread their wings to other peoples and societies. Their ultimate dream is to become the Global Supreme Rulers by establishing a single global bank with single global money.

We postulate here that in the current global monetary system, developing nations would go through somewhat similar events as pictured above.

[2] This is easy to see with the help of the equation of exchange, MV = PY. In this example, with the sudden increase in the money supply M, without a corresponding increase in real output of goods and services Y, the prices levels, i.e. P thus tend to increase ( the velocity of circulation, V, is assumed unchanged and constant).

[3] The loan (principle plus interest) is not repayable in aggregate because the interest portion does not exist in the form of money. Notice that the interest of 15% on the 900,000 principal equals 135,000. Therefore the total amount repayable is 1,035,000 but nonetheless, only 1,000,000 exist in total as money in the whole system. Accordingly, some defaults on the loans are sure to take place.

[4] Since interest charge do not exist in the form of money, competition for money therefore ensues, reflected in increase business competition.

[5] Again, this is because there is not enough money in the system as a whole such that debt is not repayable in aggregate.

[6] Imagine that you borrowed RM10,000 from a friend. Do you think your behaviour toward the friend would change, say when you meet the friend in the street? Particularly when the stipulated time for the return of the loan had expired?